There are several reasons I’m feeling rather pleased with myself this evening, as I multi-task (I’m both languishing and typing) in front of our roaring log fire on this somewhat rainy Monday. Here are two of them: 1) today, following our most recent (8-mile) hike, we topped 50 miles (we’re on 53 miles so far) as a holiday hikeage total; 2) I have finished, worn and am loving my new woolly cowl, as modelled here by my fair self, with Swanage Pier in the background:

A slightly dark and blowy day recently in Swanage. But I didn’t care, wrapped up as I was in my lovely new cowl.

I call it a ‘cowl’ but I have to admit to scepticism when it comes to this chosen appellation. The definition of ‘cowl’ in the Oxford English Dictionary certainly doesn’t quite match my creation. But the main reason I’m calling it a cowl is that I – loosely – followed the Homely Cowl pattern in Sarah Hatton‘s 10 More, Simple Cosy Projects. So perhaps I should just trust that – indeed – a cowl it must be.

Actually, I was torn between the Homely Cowl and the Simple Snug Scarf in Sarah Hatton’s 10 Simple, Cosy Projects. Both use Rowan Big Wool, but where the scarf uses three balls and 12mm needles, the cowl uses four balls and 10mm needles. So I bought four balls of Wild Berry and brought all four with me, along with both needle sizes, on holiday. Cunning, eh?

Now, the scarf really is very easy – just plain garter stitch from start to finish. And the cowl is only stocking stitch so, again, not a huge challenge. I wasn’t looking for anything too taxing given we’re supposed to be putting our feet up, but this all felt a bit too easy. And then I had a brainwave. I decided to knit the cowl in moss stitch, which I’d never done before. It would give me a chance to practice the stitch before tackling the hot water bottle cover (almost finished now, more about this another time!), which also incorporates moss stitch but with much smaller needles and DK yarn. Oh, and while the scarf and cowl patterns both suggest casting on 22 stitches I went for 25 – because 24 felt better while casting on, but you need an odd number for moss stitch and I thought, well, why the hell not! I used all four balls of yarn, and I’m pretty sure (although experiencing a sudden memory crisis) that I went for 12mm needles.

As usual, my photography skills are letting me down above – as the scarf is, in the flesh (or ‘in the yarn’, I suppose, would be more accurate), a darker, richer, more reddish (rather like red wine) colour.

Once I’d finished the knitting I was faced with a dilemma: to twist or not to twist. The Homely Cowl pattern doesn’t introduce a twist into the cowl; instead it’s just sewn up so it looks like a massive rubber band (only not at all elastic and definitely not as rubbery). But I’d definitely seen cowls on the high street with a twist incorporated. I did try to find out – briefly – what the pros and cons of a twist would be, but I’m afraid I ran out of patience (shock). In the end, I did plump for a twist: I lay the scarf flat, folded so that the ends met, then flipped one end before sewing them together. And I’m glad I did – I think the cowl hangs better as a result.

You can kind of see the twist here, on the left.

And then, yesterday, we went to a delicious Sunday lunch with great friends and I was told I’d inadvertently created a Möbius band – thanks guys! – by choosing to twist the loop. So now I’m feeling even cleverer than ever, hoorah! There’s nothing quite like a good excuse for a confidence boost, even if it’s a tad contrived.

So. What have we been up to in the Great Dorset Outdoors these last few days? Well, lots, but here are some highlights…

After a fleeting visit to Wimborne Minster last week, we had a day in the Wareham area, including a march around the RSPB Nature Reserve at Arne:

From Arne, looking roughly in the direction of Corfe Castle.

We then undertook the – roughly – 10-mile walk from Worth Matravers to Swanage and back (along the coast path out, and along the Priest’s Way back): 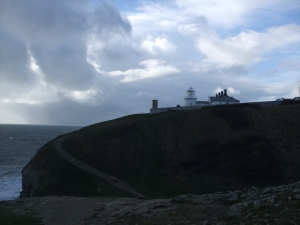 We ate our lunchtime sandwiches on Swanage Pier and the heavens opened. I couldn’t bear to just sit there getting wetter, the shelter being rather insubstantial, and my impatience got us absolutely soaked. No taxi would have taken us so we braved the walk back home in soggy clothing. But we made it, dried off, and then went for a cream tea. Almost like we planned it.

On Saturday, we tried to get to Lulworth and – in fact – we did get to Lulworth. But so did the rain, so much so that we had to abandon (far too wet even to get out of the car). So we went and had lunch in Dorchester instead. Here, we had a brief potter about and a look at the Dorset County Museum, which has an interesting exhibition about Thomas Hardy: 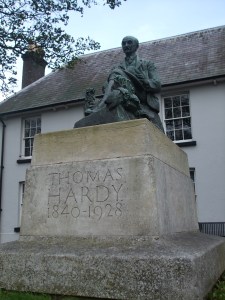 The memorial to Thomas Hardy in Dorchester. Or should I say ‘Casterbridge’?

So, what’s next? Well, more walking – we’ve still got three and a bit days down here – and more crafting. I’ve almost finished my hot water bottle cover and my wire knitted pendant is also nearly there. And the cowl is triumph, even if I do say so myself. I’m not a fan of The X Factor but even if I were I know which cowl would get my vote!

Thanks for popping in and welcome to my crafty ramblings! I'm Becky and you can find out more about me by clicking on the pic above. Happy reading!
Follow cracked but crafty on WordPress.com

© Becky Breuer and cracked but crafty, 2014. Unauthorised use and/or duplication of this material without express and written permission from this blog's author and/or owner is strictly prohibited. Excerpts and links may be used, provided that full and clear credit is given to Becky Breuer and cracked but crafty with appropriate and specific direction to the original content.
%d bloggers like this: